animals.  Animals are my favorite things.  If I’m bored – yeah, right, with 4 kids, when does that happen?  Ok, if I were ever bored, my activity of choice would be to visit a zoo, wildlife park, pet store, or anyplace I could see animals.  Without leaving the house, I can also research animals on the internet.  One of my favorite animal sites is the University of Michigan’s Animal Diversity Web.  It’s amazing how much they’ve changed the taxonomy (classification of animals) from when I first started doing research on the subject not more than 10 years ago, but it’s true – this field is one that’s ever-changing.

Every now and then, I think I’ll choose an animal to share on my blog.  Today’s animal is the pangolin.  What is a pangolin, you ask?  Well, it’s a mammal, and it’s not a marsupial, a group which contains some of the lesser known species.  See, in the classification of mammals, you begin by separating them into placental mammals (live birth) and marsupials (young live in the mother’s pouch – all but one type live in Australia).  Of course, there is also a third category – egg-laying mammals, but we won’t go there because I don’t want to lose people’s interest by getting too complicated.

So anyway, the pangolin is a placental mammal, yet it’s scaly.  The scales are actually made of a hair-like material, thereby preserving its status as mammal.  Check this out – does this thing look prehistoric or what? 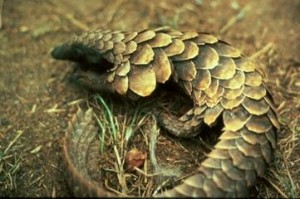 But they’re not prehistoric; they still exist today – I wonder how come I’ve never seen one at a zoo?  I guess it’s because some animals do better in captivity than others, and I applaud the zoo community for recognizing this.

Interesting tidbits about pangolins, as stated on the Animal Diversity Web:

Pangolins are a small group (seven living species placed in one genus and one family, Manidae) of mammals that feed mostly on ants. They are found in the tropical regions of Africa and Asia.  Pangolins are conspicuous and remarkable because their backs are covered with large, overlapping scales made up of agglutinated hairs. But they are strange in other ways as well. Their tongue is extraordinarily long and muscular, arising from the pelvis and the last pair of ribs deep in the animal’s chest. As a result, the tongue and associated muscles are longer than the animal’s head and body, allowing the tongue to be extruded to an astonishing degree. Pangolins lack teeth. Instead, the the pyloric part of their stomach is thickened and muscular, with odd keratinous spines projecting into its interior. It usually contains pebbles and seems to be used for “chewing” in much the same way as a bird’s gizzard. Pangolins have the ability to close their ears and nostrils as well as eyes, presumably to keep ants out.

In short, pangolins are fascinating animals that are closer to you and me on the taxonomy tree than most people would guess – they are mammals, after all.  Yet they are a mammal that most people have not heard of, and surprisingly, there are more than a few mammalian species that have this in common – I will try to share little known facts about little known mammals in my blog.

And oh yeah, since there was a complaint in the comments of another tangents.org blog about this – the song I quoted in my title is “My Favorite Things” from The Sound of Music.

5 thoughts on “These Are A Few Of My Favorite Things…”