Saturday was one of the funnest days I’ve had in a long time.  I’ve been having major zoo-fever lately, and my husband knew this and renewed our Toledo Zoo membership online before I even woke up Saturday morning.  When I finally arose, he said, how about going to the zoo today?  So we packed up all the kids, and took advantage of the almost 50° weather and headed to the zoo.  We first ate lunch at our new favorite eating establishment in the Toledo area; a place called Nick’s Cafe on Reynolds Road in Maumee.  They have excellent gyros and scrumptious Greek salads, just to name a couple of their delicious dishes…  pretty much everything is made from scratch.  Potatoes are sliced up for french fries right there in the kitchen, gyros are off the spit, the burger meat is hand-rolled… you get the idea.  Awesome food and great service too.  Highly recommended from this hard-to-please food critic!

On Saturday, everyone at Nick’s was staring at us because of our four five adorable kids – we let our oldest invite her friend along who had slept over the night before.  It made for a mini-van filled to capacity, but I’m so glad we invited her because she is a great kid, a big help (especially with our little ones because in her family, she is smack dab in the middle of 5 in birth order and knows how to help in cases of sibling rivalry!), and she had never been to a zoo before!  If I had known that, we would have taken her sooner…  Every kid needs to get to a zoo! This little girl is 9-years-old and for me, a highlight of my trip on Saturday was getting to witness her experience the zoo for the first time: the cuteness of a real-life cheetah, the immensity of a white rhinoceros, the playfulness of the baby orangutans…  I’m currently reading Jack Hanna’s new book, My Wild Life right now and it details many of the trials and tribulations the Director Emeritus of the Columbus Zoo has gone through to get where he is today.  In one chapter, he addresses his many critics (people who protest live animals being held captive in zoos, as well as protesting Jack’s taking animals on television show appearance tours), and Jack says something in defense of these practices which I completely agree with: Captive animals are ambassadors of their cousins in the wild.  We NEED to have zoos and reach out to the public with animal tv appearances; it’s the only way to get people to care enough to help with conservation.

So anyway on Saturday, after lunch, we made our way to the zoo.  When we first got in, we discovered there was going to be a magic show in the Museum of Science (one of those old Works Progress Administration buildings from the post-Great Depression era; I love their architecture!).  We settled in with the kids looking forward to a fun show.  My husband is into magic, and we staged a magic show for our local theater company a few years ago, so I know a little bit about how some tricks are performed – enough to know that this guy hired by the Toledo Zoo last Saturday was simply awful.  First, he began the show with a crabby demeanor.  He didn’t have much charisma or charm; he wasn’t very good with the kids, and his tricks stank – everything he performed could be bought in a magic store for under $100 – for the whole lot!  And during the show, he would literally sum up his tricks with one sentence – “and that’s the magic coloring book.”  Also, according to my husband, he continuously broke one of the cardinal rules of magic – telling his audience what to expect ahead of time.  For example, he had a ball trick where he told the audience, “Wouldn’t it be amazing if the red ball were no longer on the top?”  And then magically, it wasn’t…  Amazing trick, maybe; amazing magician, I think not…  On top of all that, he messed up some tricks (which happens, I guess…  a little hard to forgive when it involves tricks this simple, but…), and announced the fact that he did indeed mess them up!  Oh well, this “magic” show was free with zoo admission.  I was a little anxious after the first 7 or 8 minutes; wanting to make sure we had enough time to see actual animals, but the kids seemed to like the show, so we did not leave the magic show before its finale.  I will mention that we literally broke into a run when the guy announced that he was doing a puppet show next…  Our 4-year-old was asking to see it, but I cannot imagine what that guy (his name is Chris Clark and you can click on his name to visit his website if you’re interested in renting a magician entertainer popcorn machine) would do with puppets, so we told her we missed the puppet show…  Besides, we were at the zoo to see animals, and we were running out of time!  Here is a picture of the crabby magician (sorry Derek for the large pics – I don’t really have time to be trying to figure out how to change code): 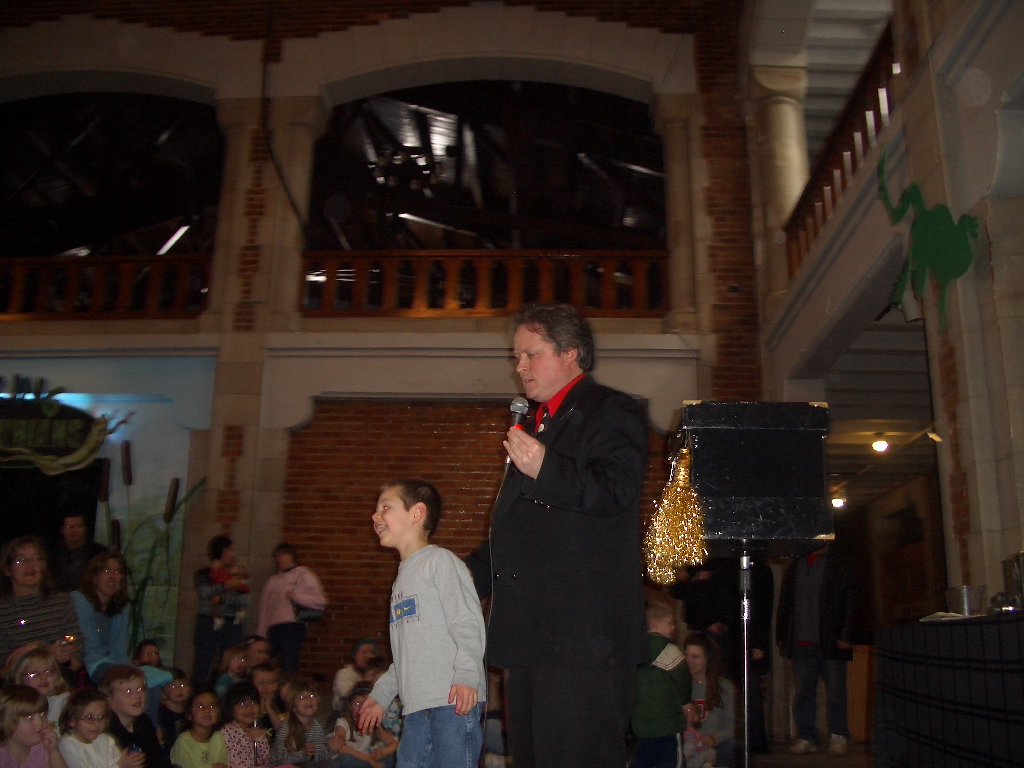 But not a terrible experience, because look at the amazement on the face of our 4-year-old when she witnessed the “magic”: 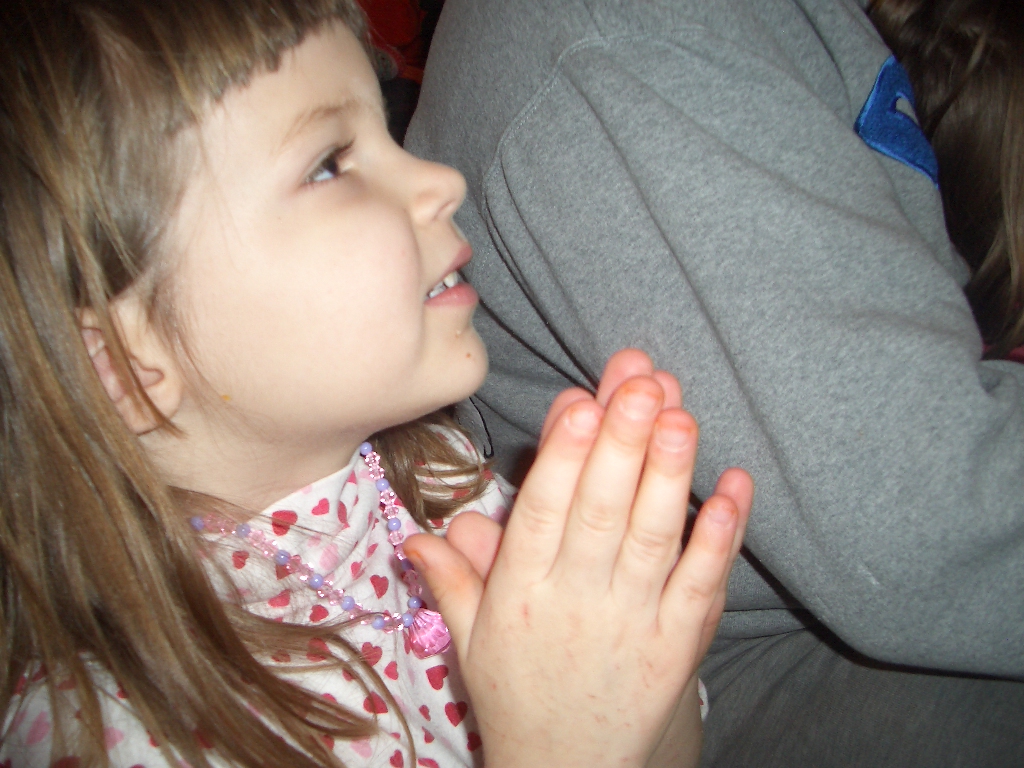 Luckily, we did get out of the magic show in time to see lots of animals at the zoo.  The elephants were moved from their outdoor exhibit to indoors, and in the process, they crossed the path right in front of us zoo visitors: 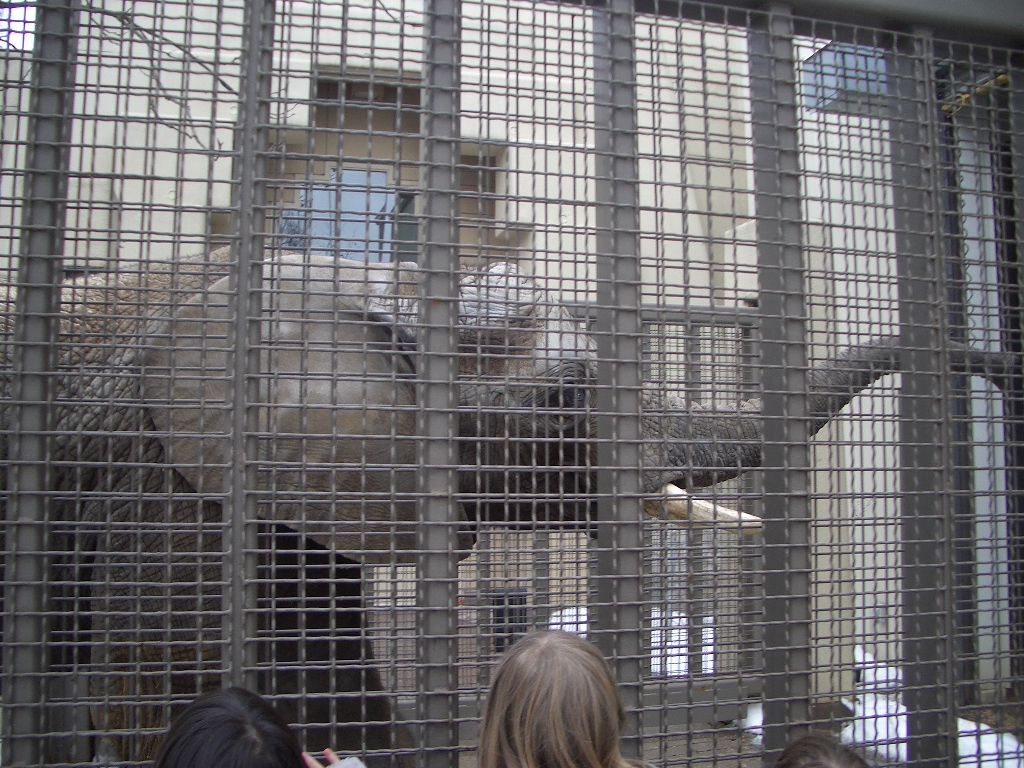 Then, the silverback (dominating male and largest) gorilla was sitting right up against the glass of his exhibit, and at the Toledo Zoo, the visitors are allowed to get right up close and personal with the great apes.  Unfortunately, I had run out of available space on my camera after taking so many pictures of the worst magician in the world – I was worried people wouldn’t believe me about how awful he was,so I made sure to snap lots of pics!  But anyway, the silverback gorilla was right there, and as we did with the chimp just minutes before, we held up everything we had in our arsenal (double-stroller) that we thought might interest him, but all to no avail.  Maybe he likes shiny things, we thought, so we held up our car keys.  Maybe he will recognize babies, we decided, so we held up our 7 month old son…  and no reaction (held up the baby with caution since witnessing a gorilla CHARGE a little boy and pound the glass really hard in his exhibit in Omaha Nebraska years ago)…  This gorilla stayed cool as a cucumber and didn’t react to any of it.

My one complaint about this zoo visit (besides the magic show!) is:  where the heck is the octopus?  He is usually one of our favorite animals to see at the zoo, and this time he was missing – something else was in his tank.  That’s disappointing, the octopus was always fascinating for our family and fun to watch.  I hope nothing bad happened to him…

Dinner at Steak N Shake after the zoo was also a fun treat – yes, even Steak N Shake is a treat when you live in a rural utopia like we do since the closest decent sit-down chain restaurant is an hour away.  A fun treat (had to be something casual after a big day with 5 kids who had had a sleepover the night before), and Disney, our 2-year-old, went poopie on the potty for the first time EVER at Steak N Shake!  That reminds me, we used to live in the same town – Normal, IL (which is actually anything but normal) as the very first Steak N Shake restaurant – it is (or at least was 10 years ago when we lived there) still in its original building – too bad I wasn’t into history as much then as I am now…  Oh well, anyway, extremely fun time at the zoo.  And as I always ask the kids, what was your favorite animal that you saw today?  Mine was the silverback gorilla.  He was magnificent.  For awhile, the gorillas were my favorite animal to see at the zoo.  Then we visited frequently last summer and got to know the family of orangutans, especially dad Boomer (an extraordinary orang because he actually plays with and helps care for his offspring – orangs in the wild and even in captivity are very easily annoyed with youngsters).  Boomer and the fam are doing great and only fell short of being my favorite animal at the zoo this weekend because of the close proximity of the humongous silverback gorilla…  Maybe my preferences will reverse next spring when I visit and the orangs are back outside and pushing their button which sprays water upon unsuspecting zoo guests…  Looking forward to that!

5 thoughts on “The Crabby Magician”