No play on words necessary  for this blog post – there really was a Psychic Octopus named Paul who lived in Germany, and he recently passed away at the ripe old age (for an octopus) of 2½ years.

In his lifetime, however short is seems to us humans, Paul made himself famous with his uncanny ability to predict World Cup game winners correctly!  Before games, Paul would receive 2 boxes of mussels, one each with a flag of the countries of the two teams who would be facing off in the World Cup.  The country whose box was eaten out of by Paul first was declared Paul’s pick as the winner of that match, and he predicted correctly an astounding 100% of the time (8/8) for his World Cup predictions, and 86% (12/14) overall. 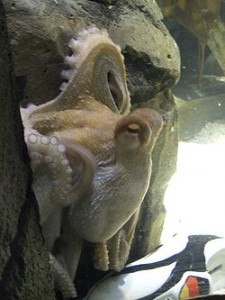