For the life of me, I could not think of a creative title for this blog post, so I just went with a logical one.  Our town has an annual Jubilee – a little carnival on the town square that comes once a year.  For all but 1 of the 7 years that we’ve lived here (we were out of town during that missed year), we’ve enjoyed the Jubilee, especially now that we live within walking distance and don’t have to worry about parking – we can come and go as we please, and it’s especially nice to spend a night at the Jubilee and run home for potty breaks rather than using the disgusting Port-O-Potties.  It’s fun to walk around the square and soak up the bustling atmosphere while chatting with familiar faces among the crowd.  Although carnival rides are quite costly these days, we are lucky that my husband’s birthday always falls during the week of the Jubilee and that we have some generous relatives who send him much-appreciated birthday money (which my husband is always more than happy to spend on the kids at the Jubilee).  The kids had a night of fun on the carnival rides, and there was an extra treat at the Jubilee this year –  an animal show!!!

I, like many of my friends it turns out, was thinking that the animal show would not be anything spectacular – a few snakes, a parrot, and maybe a jumping dog or two.  But this was more like a traveling zoo – in my backyard!!!  First, a disclaimer – I love animals.  But I’m not one of those PETA activists – I find most people like that over-the-top; you know, those people who spend their time protesting the “horrible” conditions of zoos, blah, blah…  that’s not me.  I won’t go into too much detail, but basically I believe in taking good care of animals.  I believe that most zoos accomplish that, and overall, I believe that zoos are a great way to educate the public about animals and get people to care enough to want to take actions that will stop the destruction of wild animal habitats and the killing of species throughout the world.  That’s it in a nutshell, and I’ll stop there since that isn’t really what this post is about.  My point in bringing this up is to say that when I first heard there was going to be an animal show at the Jubilee, I wasn’t going to go, much like when I refuse to attend circuses (I’m not an extremist, but circuses ARE bad for animals!!  But that’s a whole ‘nother post…).  So we were at the Jubilee, and there was a huge crowd over by the animal stage, and my curiosity got the better of me – so we checked it out.

Like I kept saying all weekend, it was like a zoo in my backyard!  They had a tortoise, a turtle, a huge python, an albino cobra, a monitor lizard (komodo dragon’s cousin), an eagle owl (largest species of owl in the world with striking orange eyes), a blue and gold macaw parrot, a binturong (rare mammal who is always sleeping every time I see it at the zoo – this is the first time I’ve actually seen one awake and in action.  They have an odd buttery popcorn smell.  I put a picture of one below if you’re curious.), a kangaroo, a monkey, a full-sized leopard, AND… a 4-week-old white tiger!  The animals seemed well-cared for and their keepers were caring and knowledgeable, so I was quick to become a big fan – in fact, I attended 3 of the 8 shows they put on while they were in town!  I would have gone to more, but it was tough enough to get my little guy to sit through the two we brought him to (especially when there were very rude kids standing in front of him – I was so mad!). 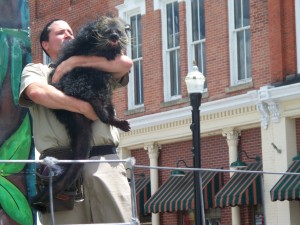 Saturday was one of my favorite days ever with me getting to take my kids to TWO animal shows and another one of my favorite things – a PARADE!!  I just love small town parades, and this one was especially great – the weather was perfect (in the 80’s, but with big puffy clouds and a nice breeze, humidity not too high for once), and two of my kids were marching in it!  PLUS, there was a vehicle handing out free stuffed dogs at the end, so we got one for each kid!  Best.  Jubilee.  Ever.  🙂  Even if I didn’t make my annual trek to the Dippin’ Dots stand this year – that should tell  you how much I enjoyed the animal show! 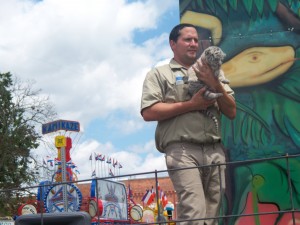 4 thoughts on “Fun At The Jubilee”