(This is a continuation of my previous post of the same title which can be found here in case you missed it.) 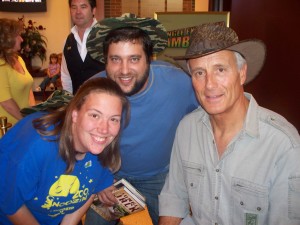 (This is us with Jack Hanna!  In case you don’t know who he is,  I included a brief description of him in my previous blog post about the show!)

Before we went into the theater to see Jack Hanna’s live stage show, we were just standing there gawking at Jack Hanna signing autographs.  Suddenly, a group of young people came up to him, and he was so thrilled to see them that he quickly grabbed his cell phone and called his wife backstage, telling her that their ‘special friends’ would be coming backstage to see her.  The friends are then ushered away, and Jack announced during the show that they are the Von Trapp Children, a singing quartet of descendants from the family who inspired the infamous memoir, stage musical, and movie The Sound of Music.  Apparently they had been in the Chicago area to tape an episode of Oprah (which will air on October 29), and they’re family friends of Jack’s and stopped by his show to surprise him. 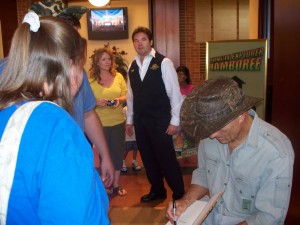 (Me waiting patiently while Jack signs just one of my many books that I brought!!)

Back to the show…  we are seated in the Paramount, and Jack Hanna comes out!!  The show itself was a mix of live animals being brought out on the stage and video clips shown on a large screen, all narrated by Jack with his trademark anecdotes and sense of humor.  In fact, at one point near the beginning of show, Jack Hanna began to tell a story, and all of a sudden he stops and looks off to the wings of the stage.  “Do I have time to tell this story?”  He asked  (presumably the producer backstage), but then he didn’t wait for an answer and replied to himself: “Of course I have time to tell it – it’s my show!”  It was not said in an arrogant fashion, but rather it seemed as if he were almost reminding himself that he is in charge.  It was glimpses of genuineness like this that made his show so special.  Jack Hanna is very real and down-to-earth (when it comes to being a celebrity anyway – often he is dreaming about ways to help animals with his head on  the clouds!), and these traits take precedent in his live appearances.

So the story he told was hilarious!  It was about his appearance on “Are You Smarter Than a 5th Grader”, and…  well, you can listen to it if you’d like:

So between video clips of a few animal causes that are near and dear to Jack Hanna’s heart (Rolling Dog Ranch and  Mountain Gorilla Conservation, among others), the following live animals were brought out on the stage for Jack to tell us about: a Red-Ruffed Lemur, blind Barn Owl, Flamingo, 2-Toed Sloth (did you know that there is a bed and breakfast in South America where you get to take care of a baby sloth in your room overnight?  I just might get over this fear of flying thing quicker than I thought I would!!), 3-Banded Armadillo, Siberian Lynx, baby Coatamundi, baby Bennet’s Wallaby (got to meet him earlier at the Jamboree Lunch), Grey fox, Fennec Fox (got to meet him at lunch also), Lesser Anteater, an albino Python, and the finale – a full grown Cheetah!  Seeing the animals was great of course, and hearing live ‘Jack facts’ about them was even better.  But I think my favorite part of the show was the end – we watched a blooper reel of Jack getting licked, bitten, squirted, tossed around, etc. by animals, and one clip was of Jack Hanna making an appearance on David Letterman’s show in the ’80s.  Jack is showing Dave how to milk a goat, and as usual, Dave is cracking jokes.  Jack Hanna (the live version) cuts in, saying, “I didn’t even mean to do this!” and the video clip shows him accidentally squirting Letterman with a spray of milk from the goat’s udder!  There is only one more thing that can make watching Jack Hanna on Letterman even  more entertaining, and that is watching Jack Hanna on Letterman WITH Jack Hanna while he narrates it!!

We laughed (plenty of laughs when Jack and animals are involved!), we cried (that video clip of the Rolling Dog ranch was so heartwarming – the ranch takes dogs who are seriously ill, and many of them have extreme physical ailments), and then it was time to go.  But not before we got to hear Jack’s bear spray story again, and he even called on one of his assistants to act it out.  He told this story during his previous appearance on Letterman, and it was hilarious then as it was hearing it and seeing it live.  Funny, that is, until we found out during the live show what really happened during that previous Letterman appearance.  Apparently it wasn’t demonstration-style bear spray, but the real thing, and Jack got sprayed in the face, causing loss of vision for over 10 minutes and some minor facial burns.  Jack warned us (and David Letterman!) that he is planning revenge for his next appearance on the show in December, so stay tuned!!! 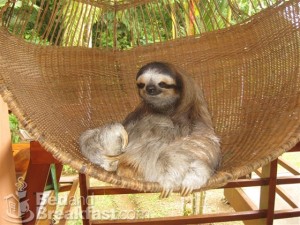 A sloth relaxing at a sloth sanctuary in Costa Rica.  While we were on the subject of sloths, this picture was too cute to pass up!!