For the past month or so, our family has been keeping tabs on  a mother dove sitting upon her nest, nestled way high on a ledge upon the neighbor’s tall house.

She sat there all day, every day; through rain, shine, and even a few nasty thunderstorms.  And then one day, she was gone.  I thought about her all day, wondering if she had abandoned her nest, especially since we never got to see the hungry open mouths of the baby doves (squabs?).  A few hours later, I spied this scene in the tree right in front of our house: 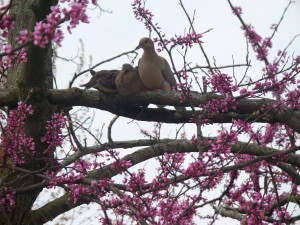 It’s Mom with two babies!  I guess doves grow faster than the traditional robins whose nests we are used to watching.  The dove chicks, er, squabs (as a quick internet search  led me to believe they’re called) hatched and left the nest before we even realized it!  A day after the above picture was taken, Mother dove was gone and the two babies sat in the same place, cuddling and preening.  They sat there for about 2 days, and I was worried that Mom had left them too early and they would starve.  Some more quick internet research told me that Mourning Doves grow rather quickly, and that the mother leaves the babies shortly after they leave the nest – so our doves were behaving normally.  I also learned that the mother and father doves take turns sitting on the nest.  The male usually takes care of the daytime duty, while the female relieves him at night.  Since both genders look alike, unless you are watching the nest constantly, you won’t notice the switch.  I was wondering how she didn’t get extremely bored sitting up there 24/7!

Every day these little guys grow by leaps and bounds, and this picture was taken only one day after the above picture, note how mother has left the babies to fend for themselves: 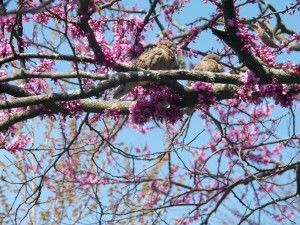 The day after this picture was taken, there was only 1 baby left in the tree, and now there are none.  We enjoyed watching these little guys grow up, and I hope it’s true when they say that a pair of mated Mourning Doves will reuse the same nest over and over again – I’ll be watching the nest and waiting!