I HAVE TICKETS TO SEE JACK HANNA!!! 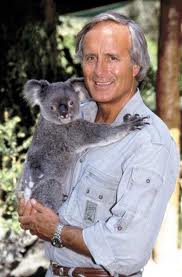 I’ve been waiting MORE than 7 years for this!  Mr. Hanna became a personal hero of mine and Hubby’s around 1998, and as we were driving down to Florida from Illinois for our honeymoon in 1999, we speculated on how cool it would be to run into Jack Hanna since we were going to Sea World (where he would and still does often appear).  And guess what happened?  We ran into Jack Hanna at Sea World!!!  We were going down to an underwater viewing area for one of the exhibits (don’t even remember which one, don’t care), and it was roped off with a sign, “tv show taping in progress”.  Just as we turned around, they took down the ropes, and so we went in, and there was Jack Hanna!  And we were the only fans in there with him!  I got tougue-tied, and I forgot every question I wanted to ask him, but luckily, Hubby was able to explain to him what big fans we were.  Jack Hanna autographed a special picture for us, even writing our names on it, but I’m sad to say that this honeymoon treasure was one of a few coveted items that was put in a special box and left with so-called trusted friends during a move when it wouldn’t fit into our car.  Unfortunately, the “friends” never sent the box to us as they promised, and who knows what has happened to our Jack Hanna autograph or other treasures by now?

But that’s not the point.  I’ve been hoping to replace it and to see Mr. Hanna do a show, but he never has appearances close to my corner of Ohio.  He came to Toledo once 7 years ago, but the ticket prices were kind of steep, especially since we didn’t know if our then 2-year-old would enjoy it, plus we had just moved to the state and didn’t know any babysitters.  I’ve regretted not going to Jack’s Toledo show ever since, especially when he hasn’t come close to the area.  But about a month ago, I happened to check his website, and Jack was going to be less than 2 hours away from us AS WELL as appearing in the town where my parents live – TWO opportunities to see him!  So anyway, long story short, we have tickets to see JACK HANNA in OCTOBER!!!  I can’t wait!  This is going to make it so much easier for me to have to forget about the MLB post-season this year (my team is terrible this year and essentially eliminated themselves opening day).

Before the show, we are scheduled to attend a Jungle Jamboree with Jack Hanna also!  Maybe I can find a way to get my honeymoon autographed picture replaced.  Hubby actually tried once to get me one for a birthday, but there was mis-communication, and Jack Hanna signed it to my husband instead of to me.  I actually thought that was pretty funny and classic Jack – totally something he would do as Jack tends to use his brain to store animal facts rather than organizational details.  I think I’ll bring my favorite book, Monkeys on the Interstate for him to autograph also; I just have to sneak backstage with all my things I want him to autograph somehow.  And I’ll have to read Monkeys on the Interstate again just so I can study up on it and write a list of questions down to ask Jack in case I get the chance again – I WILL NOT get tongue-tied this time!!!  I’ll have to take a break from reading the Harry Potter series, so now I definitely won’t be finished in time to get to see part one of the last Harry Potter movie while it’s in the theater – OH WELL!  I’m going to see Jack Hanna live on stage!!!